October is my favorite month because it has my two favorite holidays in it, my birthday and Halloween (yes my birthday is a holiday). I was so excited to spend Halloween at the parks this year! The group I was taking had a first timer, first timers are my favorite because I like to watch their excitement as they experience things for the first time! I was so glad to hear they wanted to dress up. Beth (the orchestrator) had the great idea to dress up as Disney characters, which of course I was very much down for! She had decided to be Ariel (as a mermaid) and thought it would be cute if I was land Ariel. As in right when Ariel first steps on land and just has a sheet and some rope to cover up. She helped me make my whole costume! I figured going to Disneyland on Halloween we would see lots of people dressed as characters but actually most people weren’t! Disneyland does a special Halloween party so maybe that is when everyone dresses up.

One of the workers was so impressed with my costume. “I’ve never seen that land Ariel! Most people go with the mermaid look or the Princess look.” I felt really cool being so unique, thanks to BETH!

The park wasn’t as crowded as I had anticipated, partly due to the park closing early for the special Mickey’s Halloween Party. The Halloween decorations are just as spectacular as the Holiday decorations. The big giant Mickey pumpkin greets you right as you walk down Main St. The haunted mansion turns into The Nightmare Before Christmas, and Space Mountain gets an added ghost! It is a definite must see! 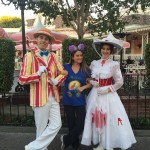